What is the Connection Between the Ocean and our Climate?

What is the Connection Between the Ocean and our Climate?

How many times has the news warned of the alarming rate at which oceans are rising, as a result of climate change? If you’re living in the modern world, chances are you have come across these two topics; however, not many of us have stopped to think about how they are actually connected. Indeed, our climate and the oceans are very much intertwined and have a strong influence on today’s world and human life.

It is a well-known fact that seas and oceans cover approximately 70% of the Earth’s surface. This is a good starting point to understand just how interconnected our weather and climate are. The process is very much reciprocal in nature - our oceans influence the weather on everything from local to global scales, while changes in climate can actually change many properties of our oceans.

To try to understand the role of the ocean in climate change and vice versa, it is important to know that the ocean is connected to the climate in the sense that it stores heat, water, and carbon dioxide; moves them around the Earth, and exchanges these and other elements within the atmosphere. Moreover, our oceans are a huge storage space for heat, water, and carbon dioxide compared to the atmosphere. They are also the world’s largest store of carbon, with more than 80% of the global carbon cycle circulated through marine waters. 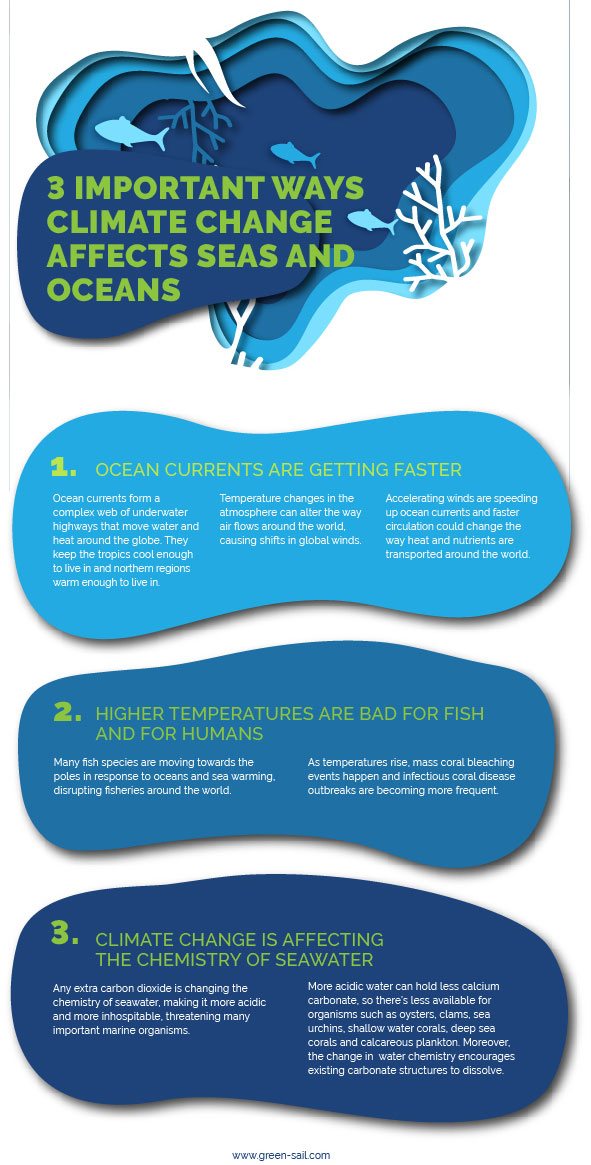 What Are the Effects of Climate Change on Oceans?

Climate change is often considered as an episode from the future, but it is obvious that the consequences are already here. As an important factor in nature, oceans mediate the world’s temperature and drive the weather, determining rainfall, droughts, and floods. But, the interaction between these two natural forces is changing and the exchange is intensifying, and as a result, we are witnessing these consequences every day all around the world.

Ocean currents are getting faster as the temperature changes in the atmosphere can alter the way air flows around the world, causing shifts in global winds. Moreover, many fish species are moving towards the poles in response to oceans and sea warming, disrupting fisheries around the world. As temperatures rise, mass coral bleaching events happen and infectious disease outbreaks are becoming more frequent. As if that wasn’t enough, climate change is changing the chemistry of seawater, making it more acidic and otherwise inhospitable, threatening many important marine organisms.

Other bad consequences include sea-levels rising for small islands and coastlines, flooding, the breakdown of infrastructure in the face of extreme weather, loss of livelihoods for farmers and fishers, food insecurity, and heat-wave deaths. As the 21st century continues, we can expect even bigger consequences, with the occurrence of climate refugees and coastal communities that will be decimated by rising sea levels.

Why is the Current Situation so Alarming?

In today’s world, there is an increasing level of carbon emissions and our climate can’t help but to respond to that. In the last 200 years, the oceans have absorbed a third of the CO2 produced by human activities and 90% of the extra heat caused by greenhouse gases. We can’t deny that the world's oceans play such an important role in keeping our planet warm, so the problem becomes even more worrying once we realize that all the energy and heat from our atmosphere is being stored precisely in our oceans. 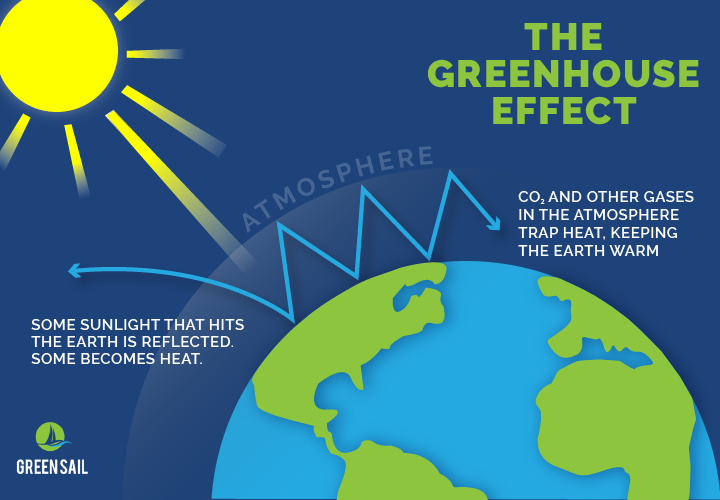 The majority of radiation from the sun is absorbed by the ocean, particularly in tropical areas. In those regions, the ocean serves as a heat-retaining solar panel and the atmosphere helps to retain heat that would otherwise quickly radiate into space. As greenhouse gases take more energy from the sun, the oceans have to absorb more heat, which results in an increase in sea surface temperatures and rising sea level. Changes in oceans’ temperatures will lead to more changes in climate patterns around the world. In fact, if this continues, we might see more extreme weather, drowning wetlands, coral bleaching, changing currents, rising sea levels and temperatures, and melting of sea ice.

Where Can We See These Changes in Real Life?

The oceans have a great effect on the climate of certain regions. Throughout history, we have seen many changes in our climate, whether we realize that or not. Apart from the Ice Age changes, several climate changes occurred even in the 20th century, such as warming from 1910 to 1940, cooling from 1940 to 1970, and the warming trend since the 1970s. Irregular changes in climate could also be seen in the region of the Sahel in Africa, which has seen a number of devastating droughts during the 1970s and ’80s.

However, probably the best example of the influential role oceans play on the climate is the occurrence of El Niño and La Niña events in the eastern Pacific Ocean. This appearance of warm water on the ocean’s surface in the eastern tropical Pacific has caused changed weather patterns around the globe, such as droughts in Australia, excessive rainfall in Ecuador and Peru and severe winter storms in Chile.Completely the opposite, the La Niña phenomenon creates periods of below-average sea surface temperatures across the east-central Equatorial Pacific. The presence of both of these phenomena can significantly influence weather patterns, ocean conditions, and marine fisheries across the globe for a large period of time.

Is There a Solution to This Problem?

From a scientific point of view, the effects of stronger storms and rising seas will become impossible to ignore. In order to solve this problem, the current focus of oceanographic research is on understanding the circumstances leading to disastrous climate events, such as El Niño. Another goal of scientists is to understand climate change throughout many centuries, by studying prehistoric records preserved in trees, sediments and fossil corals, in order to try to make projections about the changes that might occur within the next few generations.

The overall solution to climate change is to significantly reduce the emission of greenhouse gases. The most recent international agreement to address climate change is the Paris Agreement from 2016. However, meeting the objectives of the Paris Agreement will require action at international, national, local and community levels around the world. Even if such intense cooperation is required to try to solve the problem at least to some extent, knowing the seriousness of the situation, there is no better time than right now to act.

To learn more about our complex relationship with seas and oceans, why not try our free online course!